The Borusan Quartet was founded in 2005 under the guidance of Maestro Gürer Aykal. They have since joined masterclasses of Alban Berg Quartet, Juilliard Quartet, Gürer Aykal, Joshua Epstein and Maxim Vengerov. As a result of Borusan Sanat’s collaboration with the Maggini Foundation in Switzerland, they had the opportunity to make music with invaluable instruments.

In addition to their recitals, they also played as soloists with Borusan Istanbul Philharmonic, Bilkent Symphony, Orchestra’Sion, Academic Orchestra of the Capital, and the state symphony orchestras of Samsun, Izmir, Istanbul, Bursa, Eskişehir and Antalya.

They received the “Chamber Ensemble of the Year” award at the Turkish Andante magazine’s first Classical Music Awards in May 2010 and the same year, won the gold medal at the 2010 ICMEC International Chamber Music Competition the finale of which was held at the Carnegie Weill Recital Hall, NY.

Until now, they have given the world premieres of works by contemporary Turkish composers Oğuzhan Balcı, Mahir Cetiz, Turgay Erdener, Özkan Manav, Alper Maral, Turgut Pöğün, Meliha Doğuduyal and Hasan Uçarsu written for them. They also had the privilege of premiering violinist and composer Alexey Igudesman’s two works, From Edirne to Kars and String Quartet, dedicated to them. Their first CD Erkin, Aykal, Saygun featuring string quartets of the composers in the title was published in May 2013 followed by their CD with İdil Biret of Schumann’s Piano Quintet published by IBA label of Naxos in 2014, Mozart & Verdi published by Lila Music in July 2016, and last CD Company published by Onyx in September 2017 and was named the BBC Chamber Recording of the Month by BBC Music Magazine. 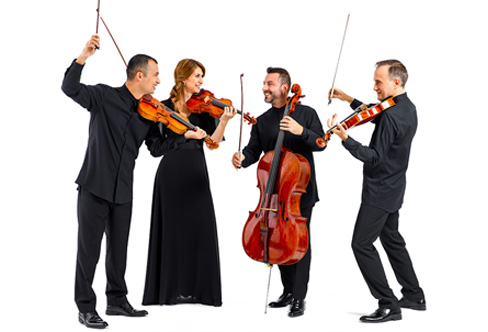 The ensemble, which performed at the West Cork Chamber Music Festival as the quartet in residence for the second time in July 2019, joined the String Quartet Biennale Amsterdam 2020 also as the quartet in residence. Borusan Quartet, which was away from the concert halls for a while due to the global pandemic, met with the audience on live and recorded radio concerts on Borusan Klasik and on the screens on borusansanat.tv.

Their repertoire encompasses a wide range of works from the classical period to the modern era with particular emphasis on the works of Turkish composers.