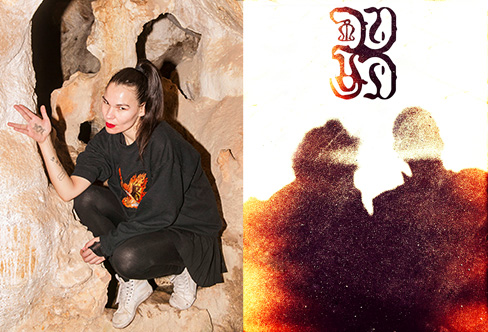 Aïsha Devi will be on stage at the second concert of the Nova Muzak Series realised in collaboration with Kod Music, celebrating its 30th instalment... Devi’s music is like no other in the world of today’s electronic music... Her voice is the most powerful instrument in her repertoire consisting of electronic beats, reverse rhythms, strange noises, throat singing and melodies. She can effortlessly carry her spiritual music over to her live performances with her voice and stage presence.

Born by the Swiss Alps with Nepalese-Tibetan heritage, Devi is in touch with the traditions of her origins and reflects these re-constructed in a new language in the sound patterns she creates in her art. She applies meditation techniques in her productions and at her performances; and places metaphysical experiments, ritualistic practices and channels of healing frequencies into the alternative club/electronic music paradigms.

Her debut album Of Matter and Spirit released in 2015 was covered with rich political and philosophical subtexts and was also the announcement of sonically significant presence in the electronic music world. Her second album DNA Feelings released in 2018 was placed among the best albums of the year. She produced video works with Chinese visual artist Tianzhuo Chen. Aïsha Devi performed with the dance company Asian Dope Boys at prestigious venues including The Barbican and Broad Museum and participated in festivals including CTM, Mutek and Unsound. Visual artist Emile Barret, who has performed in numerous worldwide locations from Mexico to Siberia, will be accompanying Aïsha Devi with her AV set.

Only a few projects in the avant-garde/experimental underground music world have succeeded in realising otherworldly images, loss, non-existence, emotions evoked by boundless ritualistic vastness like Common Eider, King Eider, the dark ambient-doom wizards from San Francisco, have. The project which was born in mid 2000s San Francisco psychedelic/art-rock scene have succeeded in elevating the sounds they produce to the heights of today’s dark ambient/drone music by reading the signs from revolutionary, illuminating artists such as Lustmord, Throbbing Gristle, Wardruna, Dead Can Dance, Arvo Part, Sunn O))) and filtering them through their intense ritual ambiences.

“If you like Swans, Godspeed You Black Emperor, Sunn O))), Lustmord, Mamiffer, Sutekh Hexen, Haxan Cloak, and Thisquietarmy, then Common Eider, King Eider, will take you on an unforgettable voyage through the most remote corners of your mind and deep into the most hidden crevices of your soul, tunnelling into you until your ego completely disintegrates. “ - CVLT Nation