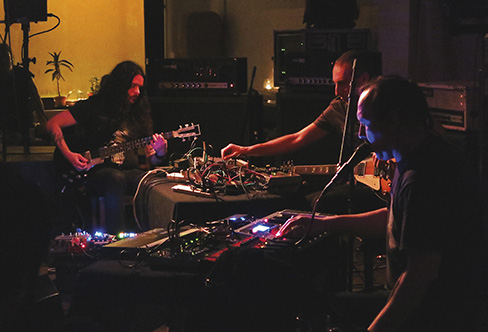 Gravetemple is a band who produces music which is a combination of genres and styles that stand on the edge of popular music such as drone, experimental doom and noise. It is also a band of stars consisting of Attila Csihar, Stephen O’Malley and Oren Ambarchi. Attila Csihar is a Hungarian musician and vocalist. Attila began his career in the cult black metal band Tormentor, his extraordinary vocals provided him with the opportunity to join Mayhem, possibly the most prominent black metal band of all time. Attila went down in history as the vocalist of the legendary album De Mysteriis Dom Sathanas which is now considered to be a classic in metal music. Afterwards, he joined the U.S. doom/drone metal band Sunn O))) and recorded five albums. Attila, who doesn’t limit his work to metal and is open to all forms of experimental music, has made collaborations with various bands such as Current 93, Jarboe and Ulver. He shared the stage with various musicians such as Diamanda Galas, Bohren & Der Club Of Gore and Lustmord with his solo act Void ov Voices consisting only of his own voice.

Stephen O’Malley started his career in the doom metal band Burning Witch. An avid metal fan, O’Malley has also designed the cover arts of bands such as Burzum, Emperor and Boris in the early 1990s. He founded the experimental doom duo Sunn O))) with Greg Anderson in 1998. O’Malley has initiated collaborative projects with numerous prominent artists from extreme, experimental and electronic music, and has also made recordings and realised performances. Among some of these names is Mika Vainio of Pan Sonic fame, Romanian composer Iancu Dumitrescu, Merzbow, F.M Einheit, and Jim O’Rourke.

Oren Ambarchi was born in Australia to an Iraqi Jewish family. Ambarchi started his music career making rock/indie rock and eventually gravitated towards musical genres which contain more experimentation space such as free improvisation and noise. Similarly to  O’Malley, he has produced music in differing genres and made various collaborations. Otomo Yoshihide, Z’EV, Thomas Brinkmann are only a few of the dozens of names he has recorded with. Let’s remind that both of these names have worked with Fennesz, Keiji Haino, Richard Pinhas, Fire! who have participated in Nova Muzak.

In this series where we celebrate the 30th instalment of Nova Muzak Series, realised in collaboration with Kod Music, with three separate concerts, the mass of sound hailing above the stage of Borusan Music House will engulf us all, embrace yourself!