BIPO’s third CD with its artistic director and principal conductor Sascha Goetzel was released in July 2014 under the Onyx label. The orchestra’s previous two recordings brought different musical traditions together as parts of a multicultural mosaic, and now they focus on the roots of Eastern music in Europe. The track list includes Rimsky-Korsakov’s wonderful Scheherazade as well as works of Mili Balakirev, Mikhail Ippolitov-Ivanov and Ulvi Cemal Erkin. The CD was launched in London after BIPO’s BBC Proms debut in July 2014.

The CD opens with Rimsky-Korsakov’s Scheherazade inspired by the “Tales of 1001 Nights”. The violin solo representing Princess Scheherazade is unconventionally accompanied not by an harp but an oud. There are othertraditional Turkish and Arabic instruments like nay, darbouka, bendir, etc. Islamey, which Mili Balakirev composed after a trip to the Caucasus features and incredible piano solo. The music borrows motifs from both Europe and the east. Islamey is followed by Suites No.1, 2 and 4 of Ippolitov-Ivanov’s Caucasian Sketches, which reflects the cultural riches and originality of the region. The CD reaches a finale with Ulvi Cemal Erkin’s suite “Köçekçe” which presents the folkloric motifs of Turkey in a symphonic style.

BIPO’s artistic director and principal conductor Sascha Goetzel says of the CD’s theme: “Istanbul has been a meeting point for the East and the West for over two millennia. Creativity, plurality and artistic freedom florished here. Many people see the Bosphorus, which runs through the city, as a border between Europe and Asia, however Eurasia is tectonically a single content. As Bernard-Henry Lévi said, Europe developed more like a concept rather than a region. Whatever the cultural background and political history are, music and art reaches beyond the boundaries. In our CD, we have used instruments from these regions, which let us come closer to the musicality of the composers who wrote works for Western orchestras.” 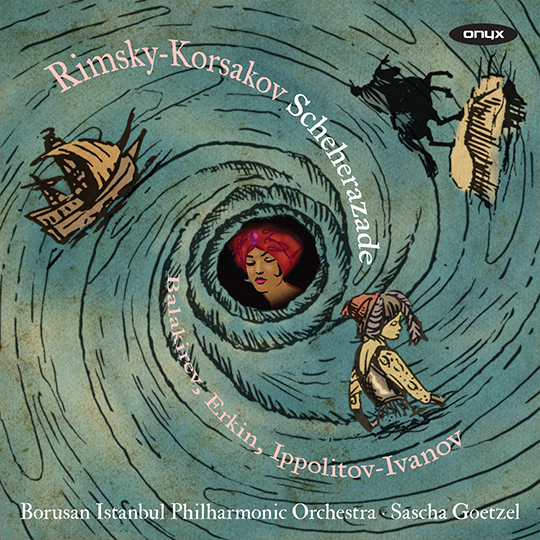